This August, the Online Super Series (OSS) Cub3d is returning to Americas Cardroom (ACR) for another run. This series, as all the others, is going to be hot, but things are getting even better. ACR is going to include 220 events with a total of $15 million to be won, making it a great way to spend the summer.

The OSS Cub3d X is a three-part tournament series with something for everyone. First up is the Mini Online Super Series (MOSS), which will run August 3rd to August 9th. This part of the series offers low-stakes games with buy-ins for as low as $1, and $250,000 in GTD cash will be awarded at the $55 buy-in Main Event at the end of the run.

The Online Super Series (OSS) follows from August 10th to August 23rd. There is something for poker players of all skill levels and $1 million in GTD cash will be awarded at the $630 buy-in Main Event on August 23rd.

Wrapping things up, the Bigger Online Super Series (BOSS) will run August 24th to 30th. This series is geared toward the high rollers and offer larger buy-ins, smaller fields and faster action. On August 30th, the $2,650 buy-in BOSS Main Event has a $1 million GTD prize pool ready to be handed out.

The OSS Cub3D is going to be a massive series and you don’t want to miss it. No US-facing poker site has ever offered anything like it, and the action on ACR is non-stop. Just as the OSS is getting underway, the $7 Million Venom will be wrapping up. Someone is going to walk away an instant millionaire, so get ready for the big game. It gets going on July 24th, running until a winner is found on August 5th.

The $7 Million Venom is quickly becoming one of the hottest events of the year includes multi-day events and four Day 1 options. For all the details on this massive tournament, check out https://www.americascardroom.eu/online-poker-promotions/the-venom/. 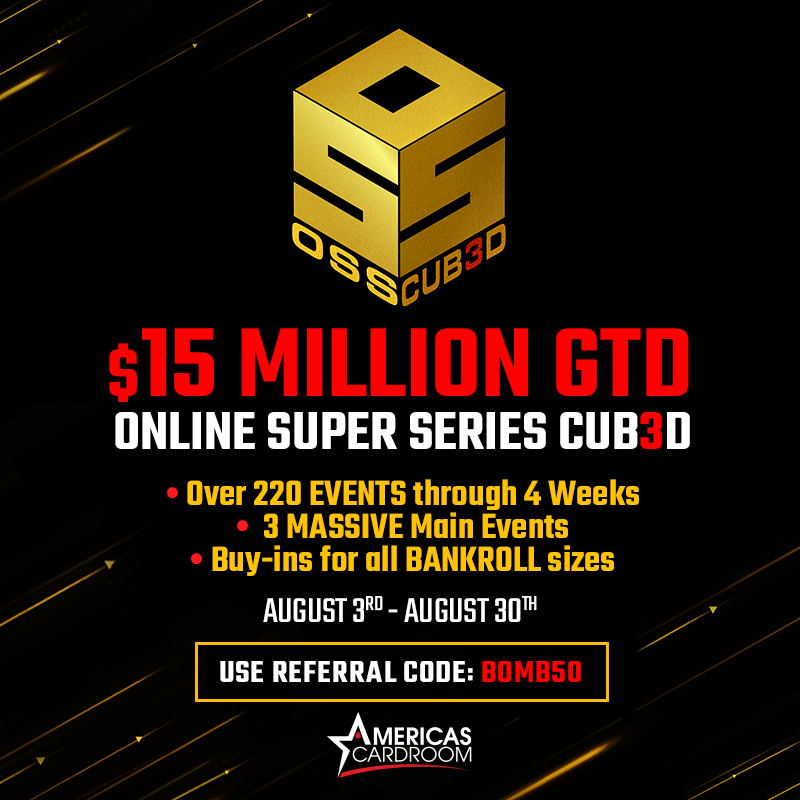