Americas Cardroom (ACR) made poker history a few months ago when it held its $5 Million Venom. It was a record-setting event, with a final prize pool of $6,382,500.

Now an even bigger $6 Million Venom is starting November 27th. This will be the largest tourney ever offered by a US-facing poker site and there is $1,000,000 in guaranteed cash for the winner – the same as during the $5 Million Venom.

The Venom will have four Day 1 options. Everything will wrap up on Wednesday, December 11th and that day will undoubtedly be one of the biggest in online poker history.

The Venom buy-in will set you back $2,650, but you can qualify for pennies on the dollar via Step Tournaments, Skip Tournaments, Regular Satellites, Mega Satellites and Cyclones.

Step Tournaments start with a buy-in of $0, which means you have the possibility of earning a $2,650 Venom seat, and the $1 Million, for free. Cyclones, added to the lineup on November 14th, are another fantastic and fast way to make it to the Venom.

One more big piece of news. ACR is running the latest installment of their Online Super Series (OSS) from now through December 15th. With $12 Million in total guarantees (including the Venom), you can’t afford to miss it. The OSS also has two $1,000,000 Main Events, one of which offers 13 Day 1 options.

Visit Americas Cardroom for all the details on the Online Super Series and $6 Million Venom.

If you’re new to Americas Cardroom make sure you take full advantage of their Welcome Package which includes 100% First Deposit bonus up to $1,000 and up to $50 Free Cash via their spinning cards promotion. If you make that first deposit using cryptocurrency, they’ll double the bonus to 200%. 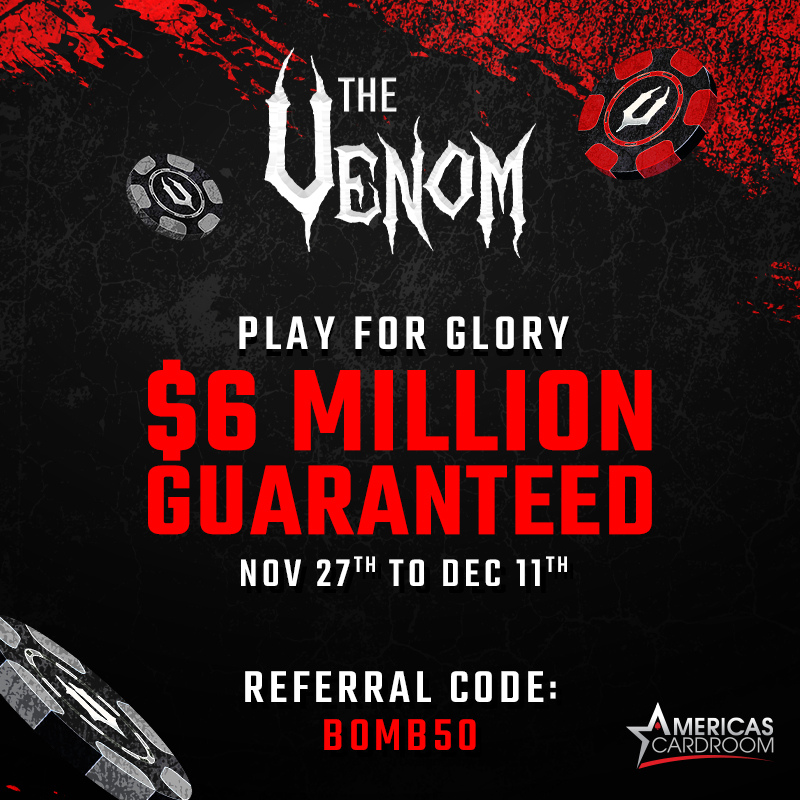